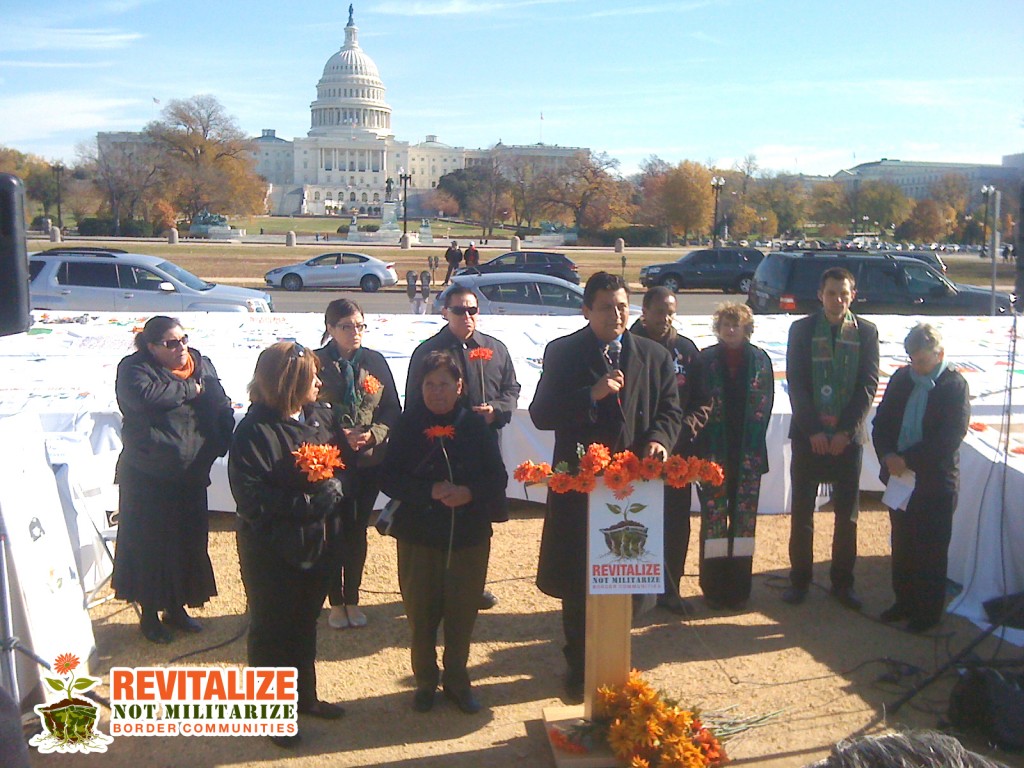 Washington, DC – As the House of Representatives continue to debate immigration reform, a delegation of leaders and families from the border travel to Washington to highlight the stories of victims of border patrol abuse and make the case to Congress that the key to successful border policy is revitalization not militarization.

At a press conference today, family members of those who have suffered violence at the hand of Border Patrol agents shared their personal stories and called for a border policy and immigration reform that prioritizes accountability and economic development over a border surge, which is being called a militarization of border communities.

According to Christian Ramírez, Director of the Southern Border Communities Coalition, “Border residents have come to Washington to demand that Congress ‘revitalize and not militarize’ their communities. Community members including faith leaders, government officials, business owners and local law enforcement continue to speak out in opposition to enforcement only policies and cite the ongoing devastation families and businesses suffer.”

“Over a year has passed since my daughter was killed and we are still waiting for a response regarding her death,” stated Valentin Tachiquin, the father of Valeria Munique Tachiquin, a 32-year old mother who was shot and killed by Border Patrol in 2012. “How can it be possible to call for more border agents when the ones that we do have, which are numerous, are not properly trained? We need to have these agents well trained first before we take any other steps regarding enforcement on the border. I do not agree with putting so many agents on the border. We are here to tell Congress that people are suffering because nobody will take control of the Border Patrol.”

“It is extremely irresponsible to put more agents at the border when we don’t have accountability and oversight, or proper training of agents we have now,” stated Shena Gutierrez whose husband, Jose, was beaten into a coma by border agents in March 2011 while attempting to enter the San Luis Port of Entry in Arizona. While in the hospital and still in a coma, border agents attempted to deport Jose to Mexico, but Shena mobilized a public outcry with the support of local immigrant rights organizations that stopped the deportation. Though still alive, Jose lost part of his skull and now suffers from seizures and other ailments following the incident.

Gutierrez added, “We want the agents to be equipped with lapel cameras so there is some control, and no more ‘he said, she said’ goes on. We want tangible reports when cases of abuse occur. It’s been almost two and-a-half years since the incident with Jose and it completely changed our lives. We’re still suffering and we have no answers.”

Today, the family members alongside leaders from the Southern Border Communities Coalition and CAMBIO, showcased over 150 quilt panels designed and created by families from the border region. The quilts feature messages from border residents expressing stories of loss that has come as a result of deportations, checkpoints, roving patrols, family separation and racial profiling, all part of what border communities characterize as a militarization of their communities. The quilt will be presented at meetings in targeted Member offices this week.

“A child that loses her parent is an orphan. A wife that loses her husband is a widow. What do you call a mother who has lost her son?”, said Maria Luz Rojas, mother of Anastasio Hernandez Rojas, a father of five who was shot and killed by border patrol in 2010. “It took minutes to kill my son, but we are still waiting three years for the government to tell us who was responsible. Nobody is taking responsibility for killing my son.”

“I’ve already heard enough amazing stories from other fasters to deepen my resolve to struggle for comprehensive immigration reform. I’ve heard heart-wrenching stories of families torn apart by deportations and stories of violence and abuse on the border,” said the Rev. Michael Livingston. “We need compassionate immigration policies recognizing the hardships and injustices facing immigrants in our country, not an increased militarization of our border communities.”