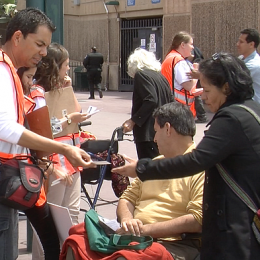 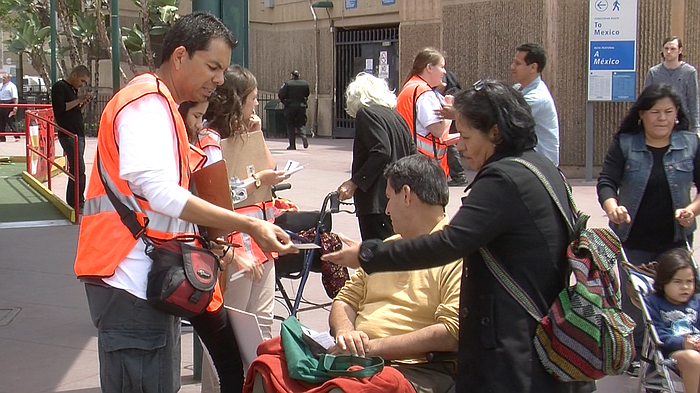 Immigration activists give people crossing the border informative pamphlets about their rights, May 13, 2015. Photo by Jean Guerrero.

The Southern Border Communities Coalition organized a checkpoint at the San Ysidro port of entry on Wednesday to inform people crossing the border about their rights.

Coalition members said people often fail to report abuses by U.S. Customs and Border Protection when they are detained, questioned or searched.

“The point of this is to provide people who are crossing the border from Tijuana to San Diego information about their basic rights,” said Pedro Rios, director of the American Friends Service Committee.

Earlier this month, R. Gil Kerlikowske, commissioner of the Customs and Border Protection, said the agency had seen a 30% decrease in use-of-force complaints this fiscal year, compared with last year.

Rios said he doesn’t think the figures reflect the reality because of how rarely complaints are filed after incidents of perceived abuse.

One San Diego resident, 21-year-old Jaime Montero, said he crosses the border at least twice a month to visit family or eat tacos in Tijuana with friends.

Montero said he is grateful for the information from the coalition because it makes him more confident about crossing the border.

“I think it’s great that they’re improving enforcement,” he said.

Martin Trujillo, 53, said he is not sure that having the information will help him. He said he’s had repeated negative experiences with border patrol officers.

“Forget about any rights. There’s no rights. Once you’re in there, you’re in their hands. They do whatever. They kill people,” Trujillo said.

Later this month, the same group plans a demonstration in memory of Anastasio Hernandez Rojas, an immigrant who died five years ago after being tasered by Border Patrol agents. That case prompted a review of Border Patrol policies.