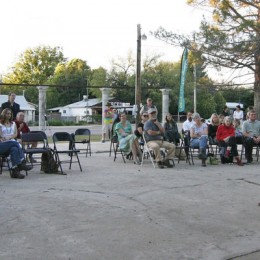 Our sadness builds like the tumult of clouds before a monsoon, and with each story told the rain finally falls,” a young female voice floated out of the speakers to the more than 70 people gathered at the Patagonia Town Park on Wednesday afternoon.The voice belonged to a Patagonia Union High School student, one of about a dozen anonymous students who created a series of spoken-word vignettes about living on the border. The listeners were at the park to mark a day of action organized by activist groups in seven spots in Southern Arizona to protest the buildup of border security.While some activists blocked the Border Patrol checkpoint on Arivaca Road and others walked a 75-mile migrant trail near Sasabe, the event in Patagonia included the student vignettes, traditional dancers from Mexicayotl Academy in Nogales, a song by singers from Avalon Gardens in Tumacacori, and talks by Dan Millis of the Sierra Club and David Seibert of Borderlands Restoration.During his talk, Millis described the billions of dollars spent on border surveillance systems and the permission given to the Department of Homeland Security to disregard 37 federal laws, including the Clean Air Act and the Endangered Species Act.For his part, Seibert told the crowd about his studies of the items left in the Arivaca area by migrants and residents’ frequent encounters with the desperate conditions of those migrants.The student vignettes fleshed out the resident experience with a more personal and poetic approach.“So many helicopters above my house. Sometimes I feel like they are a cat and I am a mouse. I walk out of my home and either way I look, there are cameras staring me down,” said a female student’s voice.“I’ve lost count of how many men and women I’ve come across wearing a green uniform,” a male student said. “I’ve lost count of all green and white cars speeding down the street with their sirens blaring. I’ve lost count of all the families looking for the American Dream. I have lost count of all gatekeepers who work for the 20-foot gate. I’ve lost count.”

The border is “causing anger in so many hearts,” a female student said. “A border between countries, a divide between families, a separation between lovers.”However, the border “is there for a reason,” she said. “People just refuse to respect any political law. This fence makes me sad because it represents humanity’s flaws, our desire to push boundaries and ignore all authority.”One student recalled her father’s stories from before she was born when people crossed the Santa Cruz River in search of opportunity and would knock on his door.“He was never really scared at all. But today, when we see illegal immigrants from Mexico, it is a huge issue and we are all terrified. Should we be scared?” she said.Another female student described growing up as a “mix of breed in a border town” as “quite confusing.” “I love the sound of last names that can identify a person’s heritage and ethnicity,” she said. “I myself have always been in the middle. To white members I am dark and to dark members I am white.” Wednesday’s event in Patagonia, as well as the actions in the other six Southern Arizona locations, was organized by a group called the Border Communities Coalition. The group said it wanted to show how the proliferation of checkpoints, surveillance towers, motion-detector sensors, helicopters, drones and thousands of federal agents in the border region has led to economic and environmental problems, as well as racial profiling, loss of constitutional rights and the violation of indigenous sovereignty.“Though often rural and isolated, we are coming together to say no to endless border militarization,” the coalition said in a statement. “We are united together to show that our communities are not war zones and that we are not alone.”

(Photo above by Curt Prendergast: At its peak, about 75 people attended a public forum Wednesday evening at Patagonia Town Park to discuss the buildup of border security.)